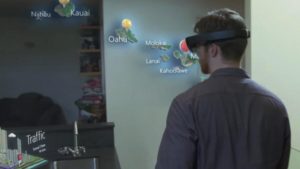 Venture capital firm Andreessen Horowitz has invested in some of today’s most talked-about startups, including Slack, Buzzfeed, and Instacart.

We’ve compiled Andreessen Horowitz’s predictions for the 16 startup themes that will be big this year.

“Computer enthusiasts and science fiction writers have dreamed about VR for decades. But earlier attempts to develop it, especially in the 1990s, were disappointing. It turns out the technology wasn’t ready yet. What’s happening now — because of Moore’s Law, and also the rapid improvement of processors, screens, and accelerometers, driven by the smartphone boom — is that VR is finally ready to go mainstream,” Chris Dixon, a general partner at Andreessen Horowitz, says.

We’ve already started to see the emergence of virtual reality: people are still excited and curious about Oculus, which Facebook announced it was acquiring last March. Microsoft and Apple are also reportedly exploring virtual reality too.

Andreessen Horowitz partner Scott Weiss says this is the year for enterprise to play catch-up. Enterprise companies need to get up to speed with consumer-facing startups, which have already created beautiful, functional interfaces, especially on mobile.

“Enterprise UI is woefully behind,” he says. “All those well-understood motions that have taken hold from our everyday smartphone behaviors — pinch, zoom, swipe, tap, speak, even just moving stuff around with our fingers — have yet to take hold in the enterprise. The user interface has always been an afterthought, the last thing one did after building a database. That is changing now.”

“Where business intelligence before was about past aggregates (‘How many red shoes have we sold in Kentucky?’), it will now demand predictive insights (‘How many red shoes will we sell in Kentucky?’),” he says. “An important implication of this is that machine learning will not be an activity in and of itself … it will be a property of every application. There won’t be a standalone function, ‘Hey, let’s use that tool to predict.'”

Chris Dixon thinks you should put your money behind “full-stack startups” — companies that “build a complete, end-to-end product or service that bypasses incumbents and other competitors,” he says. He uses Apple as an example of a full-stack company — it makes its own chips, apps, and retail stores.

Dixon thinks Lyft and Uber are full-stack startups. “Companies like Lyft and Uber said: ‘You know what? Instead of trying to sell software as an add-on, we’re going just going build the whole service using our modern software.’ They asked: What would this industry look like if it were rebuilt from scratch using technology we have today?”

Computing has become more efficient since it first started, but Peter Levine says containers will be huge in 2015.

“Containers aren’t actually a new thing. They’ve been around for a long time, but are taking off for a few reasons,” he says. “One reason is because Windows has become less prevalent in the datacenter; one of the downsides of containers compared to VMs is that they can’t run multiple operating systems, like Windows on top of Linux. Another reason is ‘microservices’ app architecture driving enthusiasm for containers; these app architectures are especially suited to containers because they have discrete pieces of functionality that can scale independently, like LEGO building blocks.”

A lot of medicine that’s being practiced today — a lot of the devices doctors use — is being designed by people without medical degrees. Andreessen Horowitz’s Balaji Srinivasan says the trend of mobile and digital health will continue to increase this year.

“One center of action is likely going to be the mobile programmable medical record — the container for all diagnostics and test results — something like what Apple’s HealthKit may evolve into,” he says. “All this diagnostic history isn’t necessarily ‘big data’; it’s just never been tracked and cross-correlated before in one place. Once technologies like HealthKit get a little more traction, millions of software engineers without MDs can build new applications on top of that data store (perhaps collected by other applications) without injuring the phone owner.”

2014 was not a great year for password security. Between the Sony leaks, the large-scale iCloud photo hack that resulted in private, naked pictures of celebrities leaking online, and security breaches at companies like Target and Home Depot, it seemed everyone was vulnerable to having their privacy breached.

So it comes as no surprise that one trend Scott Weiss is predicting will be big in 2015 is security. Companies that can identify when and where data breaches occur and then lock everything down and do damage control will be invaluable.

Even though the price of bitcoin has been dropping, Balaji Srinivasan says there are three things to consider in regards to the cryptocurrency this year. First, he says, bitcoin is still really new — so we should except adoption to increase significantly in 2015. Srinivasan also says we can expect new payment applications to develop for bitcoin, and that we should consider bitcoin as infrastructure.

“We have more processing power in our hands today through smartphones than we did in large computers decades ago. So why shouldn’t some of this processing move out of the cloud and back into the endpoint, into the phone?,” he says. “Doing processing locally has its advantages. For instance, the cost of an endpoint CPU and memory is a 1000x cheaper than the cost of CPU and memory in the server. And in many places around the world, connectivity and transmission costs are sometimes far more expensive than the device.”

When we think of crowdfunding now, we think about sitting at our computers and occasionally donating to someone’s potato salad project or a movie campaign on Kickstarter. Jeff Jordan says this will change. “With smartphones in our pockets, we not only have access to crowdfunding platforms whenever we want, but to the crowd that comprises the various social circles of our lives — from family to school, work, and the region we live in,” he says.

Scott Weiss says the solution to our society’s culture of planned obsolescence — where you constantly have to replace old or broken devices because they’re not built to last forever — is the Internet of Things. “We tend to focus on the glorified outcomes [of IoT] but the mundane ones are equally if not more powerful,” he says.

“The IoT could change things here, and create a new culture of repair. If you’re a small family-owned restaurant that can’t afford to constantly upgrade equipment or fix things, you can answer a whole new set of questions with the IoT: Is that freezer working extra hard because someone left the door open, or because its compressor is about to fail and you’re about to lose $6,000 in food?”

YouTube has been around for a decade, but Jeff Jordan says online video is still just ramping up now. He predicts YouTube will be carved out by entrepreneurs and companies for their own purposes. Besides new ways of monetizing video, Jordan says new forms of video advertising will emerge, and YouTube will start taking better care of its stars. Jordan also says other players could get in on the online video game too — it doesn’t have to be all about YouTube.

Software and data have improved, Andreessen Horowitz’s Frank Chen says, so shouldn’t the way we purchase our insurance also change? “Software will rewrite the entire way we buy and experience our insurance products — medical, home, auto, and life,” he says, in three major ways: “By changing the way insurance companies price risk; by empowering an ongoing relationship between an insurer and insured; and by changing the way insurance companies pool capital.”

DevOps — a portmanteau of the words “developer” and “operations — is a skill-set that any modern programmer should have, Scott Weiss says. He says there’s a lot of opportunity for DevOps to grow this year.

“The rise of the hyperscale cloud datacenter has now made this job much harder as developers have had to hack together tools and complex scripts for pushing code to thousands of pancake servers,” he says. “This complex cloud infrastructure — coupled with the growth of the DevOps movement today — has opened up many opportunities, starting with helping developers and companies to manage the entire process … to much more.”

Disclosure: Marc Andreessen, co-founder of Andreessen Horowitz, is an investor in Business Insider.