By DEAN STARKMAN AND RYAN FAUGHNDER

BMI and Pandora are squaring off in a federal court here over a bitterly fought case that has become the latest symbol of the digital disruption upending the music business.

The immediate issue is money: BMI, or Broadcast Music Inc., which collects licensing fees for some 600,000 songwriters and publishers, wants an order forcing Pandora Media Inc. to pay more for the right to stream its clients’ music over the Internet.

But at the heart of the rate-setting case are fundamental questions about cultural content in the digital age.

On one hand, the Internet offers the possibility for vastly increased distribution of music and other cultural works. On the other, it has proved less efficient at making money from it, setting up the battle between content producers and their agents against digital distributors.

There’s a never-ending series of Band-Aids. There hasn’t been a free market for songwriters in 70 years.– Chris Castle, a music lawyer in Austin, Texas

“This all goes back to the birth of radio,” said Mark Weinstein, a USC business and law professor.

The BMI-Pandora case, he said, marks another landmark in a historical business struggle dating to the early days of radio when record labels initially refused permission to play records over the air.

In court papers, the Oakland Internet company argued that its service is a passive experience similar to radio operations and, as such, should be governed by deals BMI has struck with a group representing radio giant Clear Channel Communications Inc. and other owners of so-called terrestrial radio stations.

Those radio stations pay 1.7% of revenue for rights to broadcast the 7.5 million works licensed by BMI. But BMI wants Pandora to pay 2.5%. 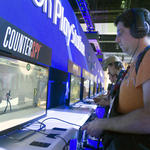 “They’re the most aggressive of any of the players in the space in trying not to pay songwriters fairly,” he said.

Pandora spokesman David Grimaldi said the court is the right place to settle the matter: “We are confident in our legal position, and look forward to continuing to serve the tens of thousands of artists who spin on Pandora and the 81 million active monthly users who enjoy listening to them.”

The backdrop to the trial is the rise of Internet music streaming as a cultural force — with more than 132.6 million users — bumping up against a rate-setting system with roots in the radio age.