Federal judge is shot and wounded outside his Detroit home 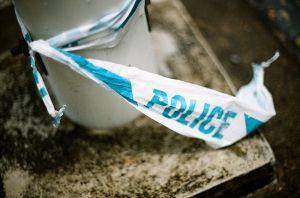 U.S. District Judge Terrence Berg was shot in the leg outside his Detroit home as he was taking out the trash on Thursday evening.

Police believe Berg was shot in an attempted robbery or home invasion, report the Detroit News, the Detroit Free Press and WXYZ.com. His wife called 911, and the two suspects fled in a dark-colored Dodge Charger.

Berg was hospitalized in unknown condition, but a statement by Chief U.S. District Judge Gerald Rosen of the Eastern District of Michigan said he is doing well. “All indications are that Judge Berg will be fine and make a quick recovery,” Rosen said.

Police said Berg was shot when he was approached by two youths who tried to force him into his house. He refused to go inside, a struggle followed, and one of the suspects shot Berg in the leg.

As police gathered outside Berg’s home, a police radio had a message, according to the Detroit Free Press account. “The judge wanted me to convey, you all did a good job getting him to the hospital,” the speaker said.

Berg became a federal judge in December 2012 and works at the courthouse in Flint. He was previously a federal prosecutor.